One last match before maybe put some side of the screens…:)? For those who 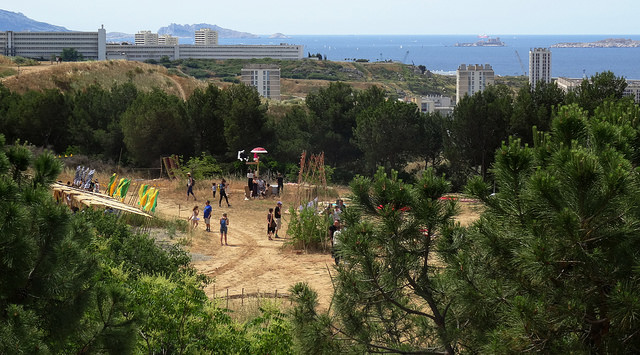 were not present here are some links with photos from Sunday to ForestA of June 4: © Lisa George © Dominique Poulain © Estelle Pierson it was a beautiful day on many aspects (of the world, a beautiful mix of people, owls workshops around the slopes of the project, a sense of calm and generous space, astonishment, great poetic moments, conversation…). It also validated by experience the location of the hamlet, which is confirmed to be a central and protected place. We were in the end more than 150 to contribute, to carry, to animate the content proposed that day, and the richness of the day was encouraging for everyone. A friendly moment of balance was also held on 3 July so that all "contributors" (whether individual inhabitants or associations) can tell and analyse in their own way the day, the meetings, the exchanges. Another important time was the meeting with the institutional partners, gathered for the first time on the ground on 30 June. There too the exchanges were very positive. It seems that the transversality of the project (between environment, culture, local development, social…) and its way of advancing in process (path doing) is now well understood and even appreciated! The major decisions in particular for the possibility of the hamlet and its shared tools are nevertheless subject to the finalisation of the agreement between Yes we camp and the proprietor Resiliance and to the arbitration of the European Fund (ERDF) which will only occur in December or January. So by then… Development side: in parallel with the continuation of the technical and regulatory instructions (networks, Convention…), it is hoped to be able to bring the water this autumn to start at the cost of the farm and initiate the arrival of the first inhabitants-animals ( donkeys, goats, bees, low Court). This would also mean a first home module and the permanent installation of a first inhabitant-human:). Side uses of places: we dig the grooves while remaining open and imaginative on what shapes it can take! Since June 2016 we have collectively established a number of core and thematic values for the overall project. This year most thematic trails have been experimented in one way or another and one of them, the wild Botany (exploration and invention from the plants present), has become an axis of activity structured under the name Jardiner the Hill, initiated by the Safi collective with the Espigaou Association and now carried by a whole group of people and associations. Garden the Hill will be resumed at the end of September with botanical walks, the care of wild plots and a small evolution of the weaving project. For the other "furrows", the idea would be to form small groups that could from the first experiments of this year gradually emerge programmes or actions, brought to several. • Memory and stories/sharing and site visit: to shape the memory of the places and the stories of what we live in the project to name, share, Orient, be hospitable? • Oven/bread/clay: the construction of ovens, the exploration of culinary cooking and the rediscovery of clay as collective itinerant practices in neighbourhoods? • Motorcycle and mechanics: inventing modes of encounter and shifted proposals to provoke a situation of constructive discussion with motorcyclists? • Local communication: communication as an action that participates in the networking, the sharing of expression, the appropriation? And for the sport and the body we would like to continue to invite local associations to test the places while continuing informally to associate the users (sportsmen and walkers/pedestrians are to this day the most numerous users). We also plan to propose in the autumn a workshop on governance and still experiments not planned because it goes with the meeting. Until we translate all this into various and varied invitations, enjoy the mellow summer!